God, Reveal To Us The Truth As True… #HoaxedMovie By @Cernovich

On 10th October 1990, a 15-year old girl, who introduced herself only as “Nayirah” testified before the Congressional Human Rights Caucus.

She told the committee she saw Iraqi soldiers take babies out of incubators in a Kuwaiti hospital, take the incubators, and leave the babies to die.

George H.W. Bush mentioned this story at least 10 times to gin up support for putting American troops on the ground in the first Gulf War.

CNN took the story and ran with it, Wolf Blitzer becoming the face of Gulf War journalism.

It Was All a Lie

“Nayirah” was Nayirah Al-Sabah, daughter of Saud Al-Sabah, the Kuwaiti ambassador to the U.S.A. at the time.

She lived and went to high school in Washington, D.C.

Her testimony was part of a campaign orchestrated by Hill & Knowlton, an American public relations firm.

Hill Knowlton received $10.5 million from an organization called “Citizens for a Free Kuwait.”

Citizens for a Free Kuwait received close to $12 million from the state of Kuwait, according to official documents.

On 7th September 2002, Judith Miller and Michael R. Gordon wrote the “metal tubes” story, claiming they would be used by Saddam Hussein to manufacture WMDs.

Soon after this piece was published, Vice President Dick Cheney went on “Meet the Press” and quoted the Miller story.

His argument was, “It’s not just conservatives who support regime change in Iraq, even the New York Times is saying it!”

Cheney was the one who leaked the “metal tubes” intel to Miller.

And of course, no WMDs were found.

Miller’s excuse was, and continues to be, “how was I supposed to know!” 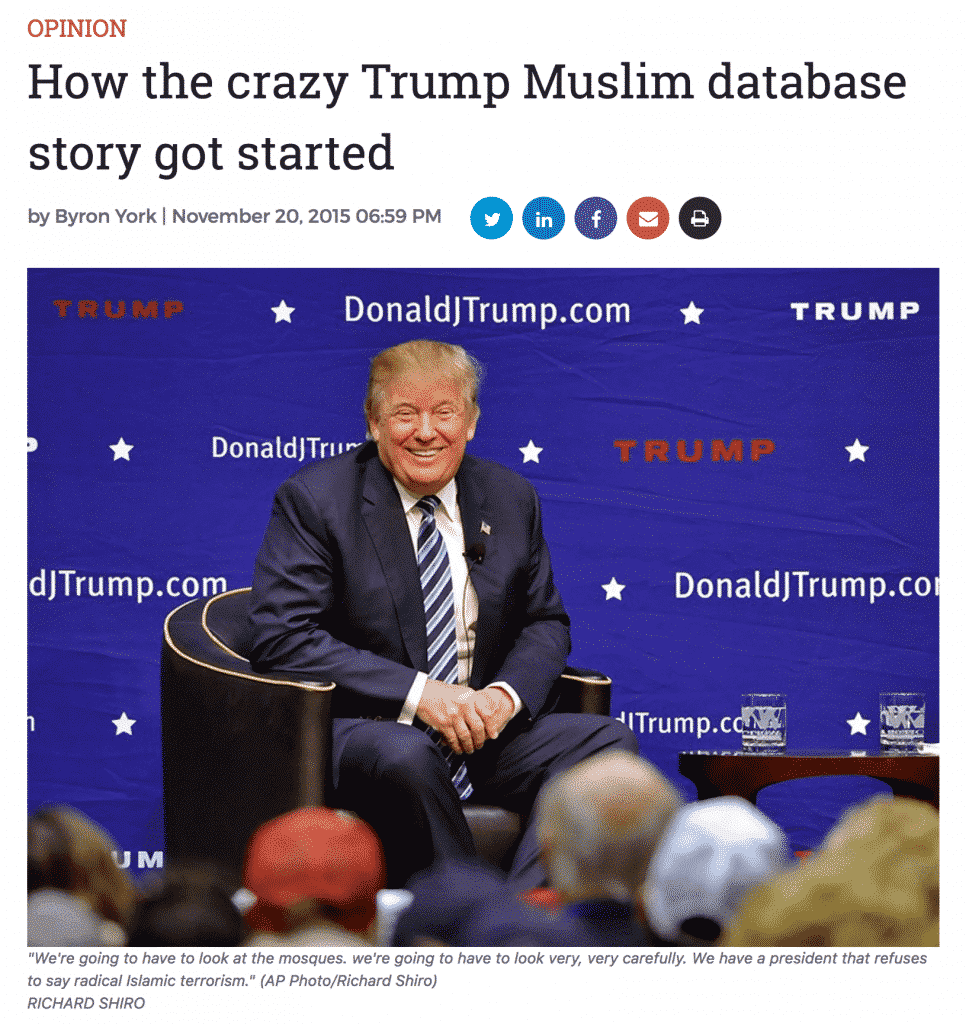 In it, he writes:

Yahoo News asked Trump whether this level of tracking might require registering Muslims in a database or giving them a form of special identification that noted their religion. He wouldn’t rule it out.

“…Wouldn’t rule it out” got reported by other news outlets as, “Trump calls for a Muslim database.”

But if you listen to the audio recording of the interview, this is what you’ll find:

WALKER: And in terms of doing this, to pull off the kind of tracking we need, do you think we might need to register Muslims in some type of database or note their religion on their ID?

He does an artful dodge and sticks to his talking points.

The Islamic tradition transmits a supplication I think is quite appropriate:

With it, is the admission that our capacity to know Truth and distinguish it from Falsehood is limited.

And the admission that God alone is the source of all truth and knowledge.

How do we know what’s real and what’s fake?

“Reality” is what our senses experience, interpreted by mental models like religion, culture, politics, and so on.

But our senses are limited and easy to manipulate.

Watch this video and be ready to get your mind blown:

Notice how even after the McGurk effect is explained to you, you can’t stop it from happening.

If it’s that easy to override your senses…

This is the fundamental question tackled in HOAXED, Mike Cernovich’s new feature-length documentary.

All media is narrative. And we are in a war of narratives. – Mike Cernovich

Originally used by the MSM as a pejorative meant to discredit alternative media sources, the attempt backfired as soon as people realized, “Hey! This is exactly what the MSM has been doing to us for decades!”

The term “Fake News” was introduced into our parlance by a non-profit organization called First Draft in September 2016.

Schmidt was heavily devoted to Hilary Clinton’s presidential campaign, donating several million dollars and offering himself up as a campaign advisor.

Yeah…that doesn’t seem fishy AT ALL.

An All-Star Line-Up of Academics, Philosophers, Journalists, And Activists

Cernovich had some really “good gets” for this film.

Of these, I was surprised to see Ryan Holiday, Jordan Peterson, and Hawk Newsome (a Black Lives Matter activist who famously protested a Trump rally and was invited to take the stage.)

My favorite interview was Ryan Holiday. Because he’s a marketer like me and understands how media can manipulate people for better or worse.

Why is this important to Muslims?

If you recall, I recently published an interview with journalist Hussein Kesvani, on Muslim Men in Journalism.

Kesvani advocated for the MSM, arguing only they have the training and experience to determine what’s newsworthy and touting their extensive study of journalistic ethics.

And while there may still be ethical journalists doing the profession proud, the reality is bias (and b.s.) are rampant.

Interestingly enough, in my experience, Muslims in the West are pliant in accepting MSM narratives.

Particularly now and in recent years, since “Islamophobia” became a thing.

An easy example to give would be many Muslims’ opinion of Mike Cernovich.

They think he’s a racist and an Islamophobe. 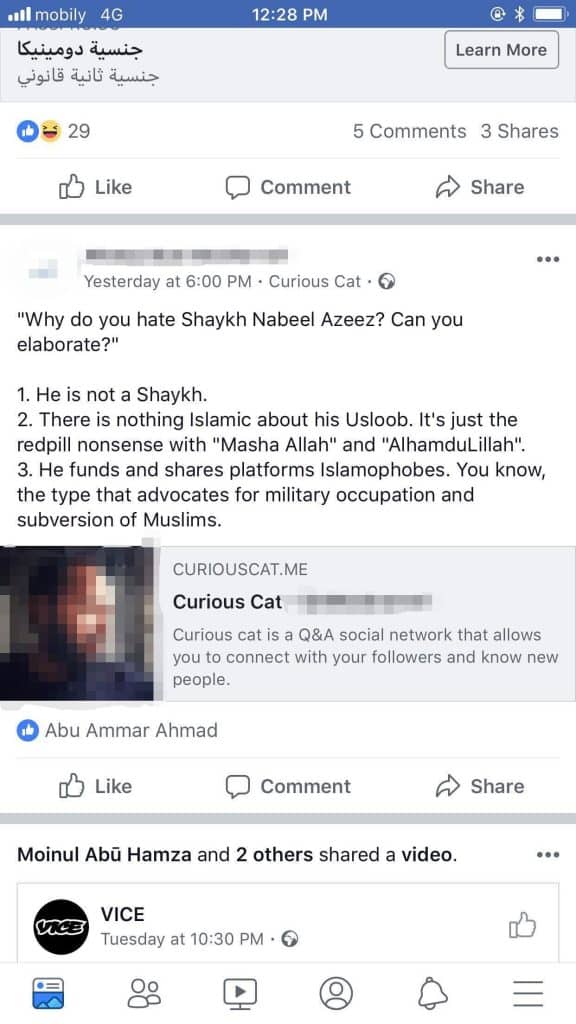 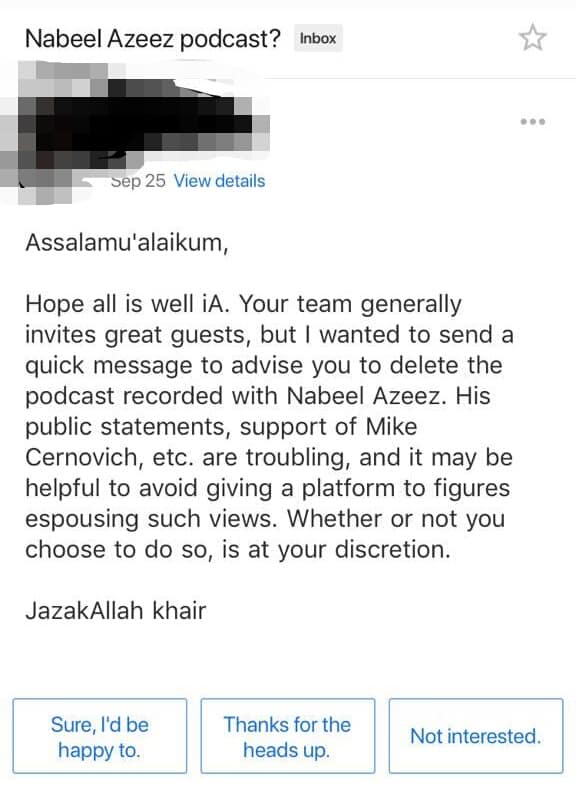 With “Muslims” like these, who needs enemies of Islam?

If I ask 100 Muslims hating on Cernovich why they hate him, I’m pretty sure less than 10 could give me a legitimate reason with proof.

I doubt they even know anything about his politics.

But they may have heard 3rd hand he’s “right-wing” or “alt-right,” and immediately assumed he hates Muslims (because, you know, all right-wingers hate Muslims) and not bothered to verify.

And then they s*** on me because “why is Nabeel Azeez supporting an alt-right Islamophobe.”

F***ing imbeciles, I tell you.

First of all, they haven’t come to any reasoned conclusion based on evidence.

Second of all, where’s the husn adh-dhann?

Alhamdulillah, we still have pockets of Muslims with some sense: 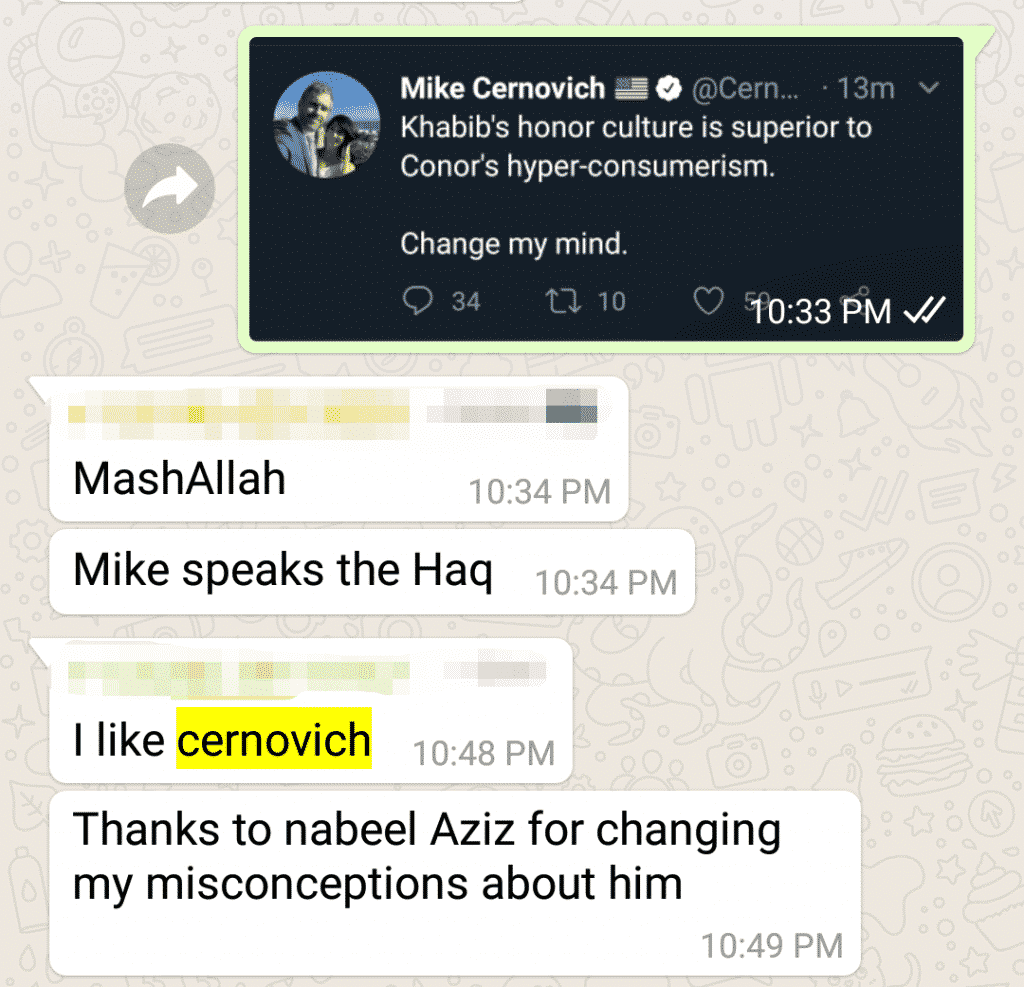 We can do a lot better as a community to listen to a wide range of voices, not just the ones that tell us what we like to hear.

As a supplement to the movie, Cernovich published transcripts of several of the interviews from the movie along with several essays on Fake News.

It’s a good supplement to the movie.

Here are a few excerpts from the interviews.

The media’s persuasion comes in a lot of different forms. One of them is visual. The most persuasive thing is visual. Our visual sense overpowers everything else. So what they choose to show as an image is the message, no matter what the “yak-yak-yak” is that comes over it…no matter what the other words on the screen say. What you remember is what you saw. – Scott Adams

You’re not good at peering into souls. You just think you are. Everybody thinks they’re good at it.  Everybody’s wrong. We’re all terrible at it. So, until you’ve seen, like, a body of evidence that somebody has changed their view in some way, or it is revealing a new view, you need to wait for a few data points. You know, the first data point that looks like it’s out-of-bounds is almost certainly nothing. You know, you need a few. – Scott Adams

Part of the reason [that] we’ve seen the rise of a lot of these figures is because the media has not done their job. The media has not held themselves to a high enough standard. They sort of violated a lot of their own norms…Meanwhile, the media is violating all its sort of stated and unstated norms: about bias…and about partisanship…and about calm sobriety…about unpleasant truths. All of these things. So I think the system is definitely broken. – Ryan Holiday

When/Where can I watch #HoaxedMovie?

Hoaxed relaunched on March 10th, 2020. You can watch it on Amazon Prime and Apple iTunes.

Go to HoaxedMovie.com to purchase your copy of the film.

You should also buy Hoaxed the book on Kindle or Paperback.

You can also watch my video review if you’re so inclined (please excuse the audio quality):

Next post: The Doors of Repentance are Always Open…Until they Aren’t