Why Omer Mozaffar is Alpha as F*** 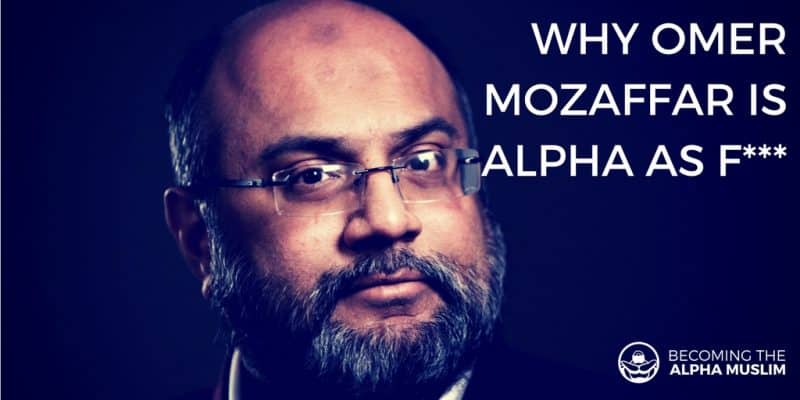 As a reader of Becoming the Alpha Muslim you may have wondered why I haven’t weighed in on the Nouman Ali Khan (NAK) scandal, given how comfortable I am wading into controversial discussions.

Here are the two most important reasons:

As the events of the NAK scandal played out I noticed something very interesting; a teaching moment worthy of discussion. The actions of one Omer Mozaffar.

If you’ve been living under a rock or you are an alien, let me summarise the situation for you:

Some accusations were made against NAK and an agreement was made between several parties with Mozaffar as the mediator, in exchange for which matters would be kept private. Allegedly, NAK broke his end of the agreement, prompting Mozaffar to go public.

And all hell broke loose.

Then, a few weeks later, I heard Mozaffar on the Mad Mamluks and several statements he made confirmed what I had observed about his behavior.

What’s more, I’m uniquely placed to speak about this, both because of the focus of Becoming the Alpha Muslim and because I don’t have a dog in this fight.

Lookit, there’s something you need to know about the Alpha-Beta dichotomy:

Alpha is as Alpha does. – Rollo Tomassi

Alpha is not a demographic. It is not a physical appearance. It is not how many co-wives one has. Alpha is a mindset.

I know very little about Mozaffar so I can’t speak to his condition overall. However, here, in this specific situation, he has expressed several behaviors that can only be described as Alpha.

I will describe three of them using statements he made during his appearance on the Mad Mamluks.

Want to master your psychology and get a pair as big as Omer Mozaffar’s? Read the Alpha Muslim Mindset, my free mini-course for Muslim men. [Read Now]

…A lot of times, people have a lot of concerns about what can happen in terms of retaliation or people have concerns about what can happen to their families. I mean, that’s been a common theme. In my case, also, there’s less to lose, right? I mean, I’m an unknown figure, for the most part, outside of Chicago. And so, I’m willing to come forward and be straightforward and say, this is what’s going on, right, knowing full well what will happen in response. And almost 100% of what I expected to happen, has happened.

He’s being modest. At least one of the cases he’s worked on is known outside of America, let alone outside Chicago.

As well, he’s being quite charitable to the other community leaders involved in arbitrating this matter.

…the scholars who are involved are people who are very, very big names that, by and large, represent different outlooks within our Islamic tradition, and they’re all very well known.

If so, being afraid of retaliation is not even an option for these “very, very big names” given the alleged seriousness of the scandal. And I’m being very, very kind to avoid criticizing ulema.

But look at what Mozaffar is doing here; he’s “tanking”.

Have any of you played World of Warcraft (or any role-playing game, for that matter)?

There’s a character class whose primary job in a group-play setting is to get, and keep, the attention of enemies (called “getting aggro”) and take the brunt of their attacks (called “tanking”), while the other members of his group damage and kill enemies, and keep the tank alive.

In this situation, Mozaffar got the aggro and tanked: holding the attention of the online mob and absorbing their attacks for the good of the group.

The next two behaviors have to do with the maxim, “Never Complain, never explain”.

…People even suggested, on that one particular post, that I should shut off comments but I wanted to give the whole community the opportunity to vent. Meaning, when I think of the community I think of the community like my family members or like my children. When you’re giving your child an injection or a vaccination at the doctor’s office your child starts screaming because you’ve hit your child with such pain for the child’s sake. And that’s what we saw, right? We can look at it as though these people are full of hate and vengeance against me; I look at as, I’ve just hit them with a vaccination and it hurts. And they responded exactly how I expected them to.

This is the sign of a man who made a principled decision to act and was ready to accept the consequences of his action, no matter what.

Now, you could argue his previous experiences facing backlash from the community for his work have given him a thick skin, so his confidence here is not particularly impressive.

But as someone who faces criticism almost daily from feminists, white knights, betas, and cucks for the work I do on Becoming the Alpha Muslim, I can say from experience that while you develop a tolerance for it you are never immune to the kind of malice and vitriol people are capable of online. Mozaffar’s conduct and resilience here required self-confidence, frame control, and mindfulness.

“…Lots and lots of people called me up, lots of my friends, who pretty much started doing their own investigation, ‘did you do this?’, ‘then what happened?’, ‘then what happened?’, and, you know, I’d have to stop the conversation, saying, ‘I appreciate your need for your heart to be settled but the best you’re going to be able to rely upon is any amount of trust you have in my judgment. And if you have no trust in my judgment that’s also fine too’.”

What happens when you’re a man of principle who is resolute and never complains? You become a man who lives life on your terms. When this happens, you stop explaining yourself or justifying your actions to people who don’t matter.

As Mozaffar describes it, he did everything required of him as a Muslim before going public. He consulted other Muslims and prayed istikhara, then acted.

As far as I’m concerned he doesn’t owe you, me, or the unwashed masses on the internet a damned thing, let alone an explanation because he’s fulfilled his obligation to Allah and tried to follow the Prophetic Sunnah to the best of his ability.

Here’s something you need to understand about masculinity:

There’s a difference between being a good man and being good at being a man. A man can be one or the other, or both. And there are examples of all three.

What’s more, “Alpha” is not what appeals most to your sense of virtue. Prisons are filled with Alphas who directed their Alpha-ness to criminality. As well, there are Alpha husbands, fathers, and leaders of men.

Omer Mozaffar presented an excellent opportunity for me to objectively describe what Alpha means using a practical example. He’s probably the last person you’d expect me to describe as Alpha.

But you best believe, during this whole NAK fiasco, Omar Mozaffar was Alpha as f***.

What do you think?

Do you agree or disagree with my assessment? Leave a comment below and let me know.

Next post: How to Learn Math EVEN IF You Ain’t that Smart (feat. @EdLatimore)

Previous post: How to Make a Side Income with Niche Sites (feat. @kyletrouble)