I, Muslim: On Authenticity 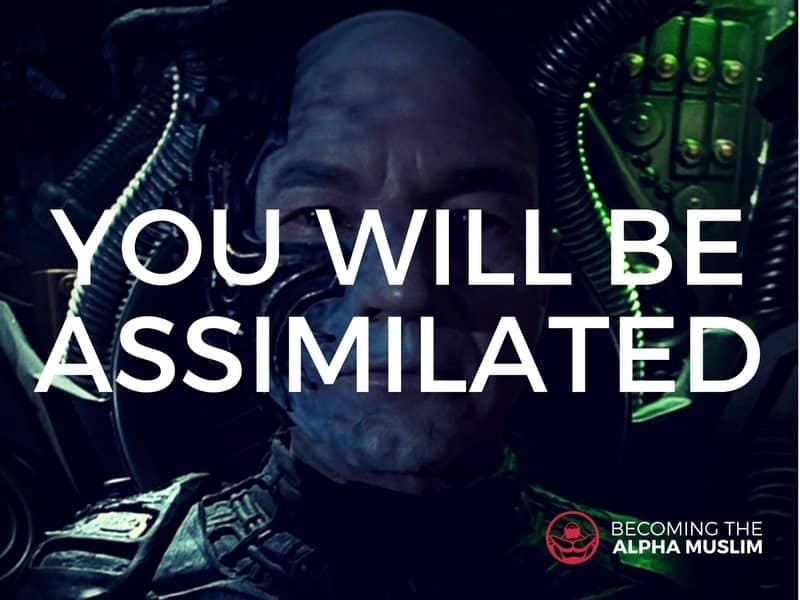 Islamic didn't come to turn us into the Borg.

I reflect on my own personal journey as a Muslim, how I express my Islam, and some crucial decisions I had to make before launching Becoming the Alpha Muslim.

Please subscribe to my podcast and leave me a rating and review on iTunes because it helps people find the show and benefit from the content.

It’s not something I’m particularly proud of; it’s just who I am.

I burst out laughing at inappropriate times and try to get a joke in no matter how serious the setting.

I have to make a conscious effort to keep my voice down.

I say whatever comes to mind.

It’s gotten me in trouble many times during my life.

Once, as a teenager, I was chatting to my uncle and brother about something random.

At some point the conversation switched to the topic of racism.

I blurt out, “I’m not racist when it comes to women.”

My mother was in the next room and she overheard me.

I ended up getting an earful.

When I eventually got serious about Islam, for the longest time I would try to hold back my natural tendencies in an effort to seem ‘proper’.

And you feel fake.

Islam didn’t come to turn us into the Borg.

You can still BE YOU while being an observant Muslim

At first glance it looks like I’m stating the obvious.

But just think about all the pressures you face..

From your family, your friends, and your community.

To behave a certain way.

To look a certain way.

To worship Allah a certain way.

And God forbid you step out of line or make a mistake.

(Maybe that’s why the “don’t judge me” crowd went to the other extreme. Protip: it’s a bulls*** concept).

It can be exhausting.

But it doesn’t have to be.

Give yourself permission to be imperfect

A while ago I spoke to Nour Goda of the now nct Between Arabs Project about this tug-of-war.

She talked about the difficulty of being an Arab-American Muslim woman, and juggling those four identities. I talked about juggling my bombastic personality and the expectations that come with being a ‘practicing’ Muslim.

The struggle is real.

We’re all at different stages in our Islam. Some of us are further along the path than others.

Don’t beat yourself up when you aren’t perfect. You were never meant to BE perfect.

ISLAM – that is, the act of submission to God – is in your…

I’m going to use some Bruce Lee.

Think about how it relates to our discussion today, how it applies to your own life and your own expression of Islam.

To me, ultimately, martial arts means honestly expressing yourself.

Now, it is very difficult to do. OK?

It is very easy for me to put on a show and be cocky, and be flooded with a cocky feeling and feel pretty cool and all that.

I can make all kinds of phoney things.

Or I can show some really fancy movement.

And you have to train.

You have to keep your reflexes so that when you want it, it’s there.

When you want to move, you’re moving.

And when you move, you are determined to move.

Not taking one inch less than intended.

So that is the type of thing you have to train yourself into, to become one with the punch.

This one works at both the individual level and communal levels.

Again, think about how it relates to our discussion today.

If you put water into a cup, it becomes the cup.

You put water into a bottle, it becomes the bottle.

You put it in a teapot, it becomes the teapot.

Now, water can flow or it can crash.

Be water, my friend.

The reason I’m quoting verbatim is because I want you to use your brains.

Absorb what is useful, discard what is not, add what is uniquely your own.

This applies to all kinds of knowledge.

Absorb what is compatible with Islam, discard what is not, and (through your Muslim-ness) add what is uniquely your own.

There’s also an element of being proactive.

Islam is not for lazy people

I ask my Alpha Muslim Mindset students to tell me the #1 problem they are facing right now.

The intent, at least for now while my audience is small, was to offer personal coaching, and help anyone work through their problems to the best of my ability.

So far I’ve been able to help a few people.

However, I want to give you an example of the type of person who BTAM is NOT for.

This is the type of person who has a victim mindset and is not going to take the action necessary to improve himself.

About a month ago, one of my students sent me this email.

OK, no problemo. It happens.

Everyone goes through a dry spell now and again.

But something about his email didn’t sit right with me.

This was my response.

Still, I wanted to help him in whatever way I could.

I was willing to give my time and energy to help him, but he refused to take action.

(When he’s ready to get to work, he can subscribe again.)

I don’t want such people reading my material.

I want to help you to make real improvement in your lives.

This post has been abstract so far and the point of BTAM is practical advice, so I want to give you one thing you can act on immediately.

Don’t apologize for being who you are.

Don’t apologize…unless you’ve done something wrong and you really mean it.

For many of us, saying “sorry” is a reflex.

We just blurt it out without thinking.

Think about how many times you said “I’m sorry” last week.

Did you actually do something wrong, for you to apologize?

Did you mean it when you said it?

Most of you are probably nodding your head in agreement right now.

Think of something else to say.

Try it for a week and let me know how it goes in the comments (and how your language changes in the process).