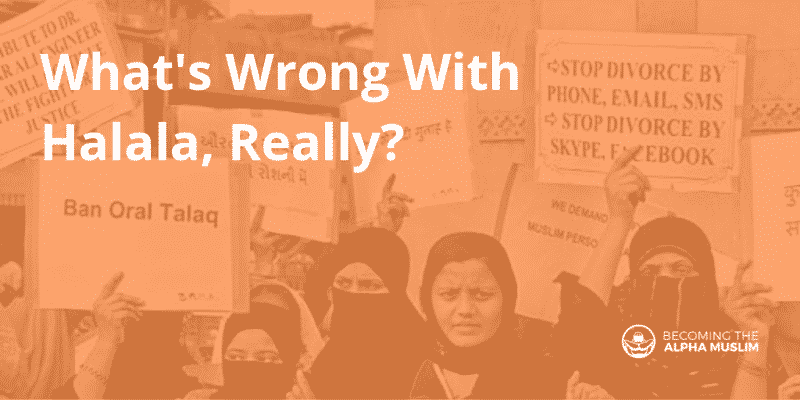 After publishing this post, someone told me about an authentic hadith related to the issue of Halala marriage:

Curse be upon the one who marries a divorced woman with the intention of making her lawful for her former husband and upon the one for whom she is made lawful.

It is authentic according to Sheikh Al-Albani.

In this case, there is no way Halala marriage can be permissible.

And even if the hadith were weak, I would not go anywhere near the practice.

I am leaving in my original comments in this post, so future readers will see both the error and correction.

The reporter interviewed a woman who was allegedly abused by her husband over the duration of their marriage.

During an argument, her husband sent her an SMS saying, “talaq talaq talaq.”

As is usual in these situations, the fella regretted flying off the handle.

And apparently, this woman was still in love with her husband and wanted desperately to get back together with him…

So much so she was willing to marry a stranger, let him bone her, and then divorce her…

Just so she could remarry her allegedly abusive husband.

The rest of the piece features the reporter speaking to a Muslim laywoman who works at the “Islamic Shariah Council” on the validity of triple talaq and halala services.

Why didn’t they speak to an Islamic scholar? Beats me.

Why did they only consider the Salafi opinion on this issue? Beats me.

The piece also has a female reporter going undercover to meet a man providing halala services.

She posed as a triple talaq-ed divorcee who wanted to do halala so she can get back together with her ex.

They discuss possible solutions and costs over a cuppa.

And by solutions, I mean the “staff” this dude had on call, ready and willing to lay the pipe to this broad for a small fee of 5,000 British pounds.

Let me tell you, this cat was a proper salesman.

He anchored the price at 5k and then offered to do it himself for 2.5k + costs (i.e. getting the nikah certificate, booking a hotel room for sexy times, etc.)

The point of the piece is that halala is abusive and amounts to abuse, “zina,” and “prostitution.”

So you’re telling me it’s not only FORNICATION but PROSTITUTION to marry a divorced woman, sleep with her, then divorce her?

See, this is the problem with religious illiteracy among Muslims…

They’re ruled by their emotions and can’t deal with issues properly.

Now, before the Muslim feminists and coconut knights roll up on me with tiki torches…

I’m not advocating for anything that is haram.

But do halala situations unequivocally qualify as haram in all cases?

Let’s think about this rationally for a minute.

What is Triple Talaq?

This is when you say “I divorce you” 3 times in one instance.

There’s a difference of opinion on whether this situation counts as a revocable divorce (i.e. one talaq, the husband can take her back) or an irrevocable one.

The result of an irrevocable divorce is the couple can’t get back together unless the woman re-marries, consummates that marriage, and then divorces the second husband.

This essay provides 14 different proofs as to why triple talaq counts as an irrevocable divorce.

What matters is the opinion the couple follows.

So, let’s assume they believe it’s three talaqs and not one.

To solve the issue of triple talaq take-backs.

All the ex-wife has to do is:

Apparently, these triple talaq situations are quite common.

Women being women, one can’t help but sympathize with a poor husband driven apoplectic with rage.

So, some entrepreneurial men have taken it upon themselves to perform the community service of helping lovebirds have long, happy marriages…

And be compensated for their trouble.

So What’s The Problem?

Everybody’s like, “OMG THIS IS BASICALLY MUT’A.” (Mut’a is the temporary marriage permitted by Shia Muslims.)

Last I checked, this entire situation is a mockery of the Shariah from pillar to post.

Just think about it…

You have a man who has no control over his emotions and thinks marriage and divorce are toys for him to play with.

You have a woman who’s so emotional (I repeat myself) she’s willing to PAY to have a (halal) one-night stand with a total stranger, just so she can stay married to her husband (who clearly doesn’t give a f*** about her.)

And the “Halala Wala” is the bad guy?

The way I see it:

There’s nothing legally wrong with this arrangement

But here’s where s*** gets squirrely.

The woman has a waiting period after a divorce:

The marriage needs to be conducted in accordance with the Shariah:

Keep in mind, the integrals of a valid Islamic marriage are only:

All the rest is flexible.

In any case, “squirrely” seems to be where these halala situations normally end up.

Look, this ain’t about the validity of triple talaq or halala.

The real problems here are the secretive way these arrangements occur, the potential violations of the Shariah as a result of said secrecy, and the extortionate nature of the transaction.

And these problems are a direct result of other, larger problems in our community.

I’ll try to explain each of these individually.

Divorce is not a game

‘Umar ibn al-Khattab said: ‘Verily, the people have hastened in a matter in which they used to have patience, so if only we were to enforce it on them.’ So he enforced it on them.”

If you ask me, triple talaq being counted as 3 divorces (and thus irrevocable) and not one is a fantastic deterrent.

This ruling actually protects women and cautions men to not lose control of their emotions.

There’s another aspect to this, and it shows how self-serving Muslims are with respect to Shariah…

Let’s say a triple talaq happens and the couple regrets it.

What do they do?

Well, a lot of them go fatwa shopping to the Salafis looking for an out.

The only other option is to pay the real price for their stupidity.

There is no “One”

…And soul mates are not a thing.

Imagine how f***ing degenerate this relationship is:

Now, this heifer is willing to take some strange d*** because she’s so “in love” with her ex-husband.

And the ex-husband is totally cool with her getting pounded by some rando just so he can get back together with her.

The dude literally cuckolds himself!

The Halala husband is the bad guy? GTFO.

Look, I’m not saying you need to be Captain Save-A-Hijabi here but…

Some were legit victims (not the social media “survivors”)…

And most were in marriages that just didn’t work out.

Fellas, if you’re holding out for a virgin, I’ve got bad news for you.

Even the Niqabis are out here doing dirt.

So it’s not like you’re losing much if you marry a divorcee.

Yes, all things being equal, go for the virgin…but my point is it’s worse than a coin-toss you’ll actually get one.

In any case, this is what I mean by unnecessarily extreme stigma against divorced women.

I picked my words carefully here – there certainly is (and should be) valid stigma against some divorced women (e.g. women who divorce-rape their husbands, women who falsely accuse their husbands of abuse, etc.)

But there is a lot of stigma against divorcees that out of bounds.

It’s this stigma that puts couples in situations where halala can be abused – it’s all cloak-and-dagger s***.

What if everyone was cool about divorce?

You think some Pakis at BBC Asian Network would have to “go undercover” to “investigate” halala?

Everybody’s f***ing (but we can’t talk about it)

I really think it’s stupid how we Muslims deal with the topic of sex.

Our attitudes toward sex are positively Victorian.

We’ve totally gone down the lizard hole on this one.

I’ve heard scholars who won’t even say the word “sex.”

I’ve heard Sufi-type-Muslims who act like sex is “dirty” and a necessary evil.

I mean, I get it…haram sex is haram (fornication, adultery, sodomy, scissoring etc.)

But can a married couple just enjoy themselves, FFS?

Oh and by the way…

You don’t need to be in love with someone to have sex with them!

The only thing a Muslim needs to have sex with someone is a valid marriage.

The tone of the entire bloody piece was, “OMG, you’re having sex with a ‘stranger’?”

And don’t get me started on divorced women’s role in enabling this industry.

Right up until it’s time for women to accept the consequences of their choices and actions.

At which time, women suddenly become damsels in distress, the weaker sex, and effectively treated like overgrown children.

Dude, she CHOSE to go the Halala route.

Nobody held a gun to her fat head.

They don’t want men to have any control over sexual access.

When I say “they” I mean Muslim women and their beta male orbiters.

Not just the Feminists…all of them.

Is a clear and present danger to a social order that puts women on a pedestal.

In our zeitgeist, any situation where men set the terms on which sex happens MUST be stamped out immediately.

And for sure you can’t have men getting halal sex from women without financial and personal responsibilities.

What will the world come to?!

You know, if you stopped for a moment and really thought about it, you’d realize our dumbass attitudes toward sex really only hurt Muslim women.

That’s why we have so many #foreveralone aunties.

You see the same scenario playing out:

It’s all about controlling YOU.

YOU, my friends, are nothing more than a Clydesdale that walks on two legs…

You, my friends, are nothing more than an ATM.

>Then maybe, just maybe, you’ll get starfish sex from a land-whale once a month…

IF you’re a good boy and did all your chores around the house.

And no, it’s not enough that you’re fulfilling your prescribed Islamic responsibilities…

Before some goofy broad or low-testosterone da’ee says you’re allowed to have sex.

And you better STFU and take it.

I really don’t see the point of charging 5,000 pounds for what essentially amounts to free halal sex with as many women who consent to the relationship.

That’s why I’m proud to announce that Becoming the Alpha Muslim is getting in the Halala game!

And we’re gonna go strictly by what’s permissible in Islam.

Are you a Muslim woman who’s been triple talaq-ed?

Do you and your husband want to get back together at some point?

Becoming the Alpha Muslim is ready and willing to perform this community service!

Now, there are some conditions:

*See the integrals of marriage mentioned above. Alternatively, we can adhere to the integrals as stipulated in the madhab you follow.

**Since the whole point of this relationship is for you to remarry your ex-husband, I will divorce you after our marriage is consummated.

I’m looking forward to doing business with you. 😉

After publishing this post, someone told me about an authentic hadith related to the issue of Halala marriage:

Curse be upon the one who marries a divorced woman with the intention of making her lawful for her former husband and upon the one for whom she is made lawful.

It is authentic according to Sheikh Al-Albani.

In this case, there is no way Halala marriage can be permissible.

And even if the hadith were weak, I would not go anywhere near the practice.

I am leaving in my original comments in this post, so future readers will see both the error and correction.

Next post: Boys in the Cave or BOYS CAVING IN?